We are facing at MSI MEG Aegis Ti5 desktop and it has a science fiction design. Beyond this we have to highlight the circular control located on the front of the chassis that allows us controlling various characteristics of its operation. Allows you to select between different system performance settings and display their status. It also works as a button to start games and manage profiles, settings, sound, lighting and other functions through the MSI Dragon Center software. 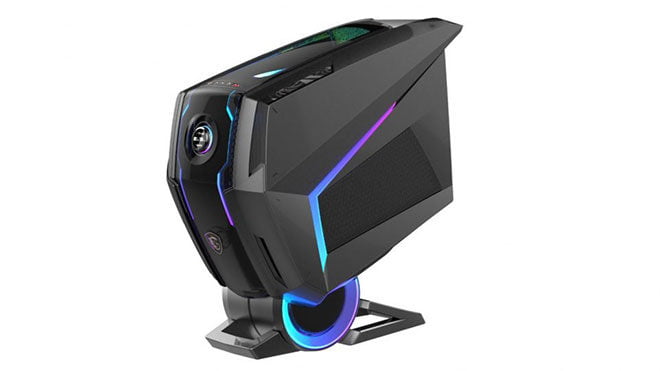 MSI MEG Aegis Ti5’s hardware base is made up of one of Intel’s new and most powerful processors for the consumer market, the 10-core, 20-thread Core i9 10900K installed on an MSI motherboard with Z490 chipset. For the graphic section, MSI comes with GeForce RTX 3080.

MSI MEG Aegis Ti5’s DDR4 RAM memory capacity rises to 128GB in four slots and the internal storage is also at a high level with three M.2 2280 connectors for NVMe SSDs, two 2.5-inch bays for SATA SSD and a 3.5 inch bay for an additional hard drive or an optical drive.

The MSI MEG Aegis Ti5 mounts a 750-watt 80 Plus Gold power supply, supports advanced connectivity such as Wi-Fi 6, 2.5G Ethernet LAN, Bluetooth 5.1 and Thunderbolt. On the front we see USB Type-C ports internally connected to USB 3.2, audio outputs for microphone and headphones. We do not know availability and price for this machine with a spectacular design and great power. It will not be cheap.

A new monitor with an extreme 360Hz refresh rate. A “weapon of war” on next-generation screens, although we see it limited to those who compete in electronic sports or are great enthusiasts. Lets see MSI Oculux NXG253R’s specifications.

The size of MSI Oculux NXG253R is limited to 25” as is its native resolution at 1080p. It supports G-Sync Ultimate synchronization technology and the new Reflex Latency Analyzer function, a truly accurate latency system, which detects mouse clicks and measures how long it takes to display in pixels.

The MSI Oculux NXG253R offers a response time of 1 ms (GTG) and the Mystic Light lighting system to personalize the whole. The new 360 Hz Oculus will be available in November with an official price of $799.