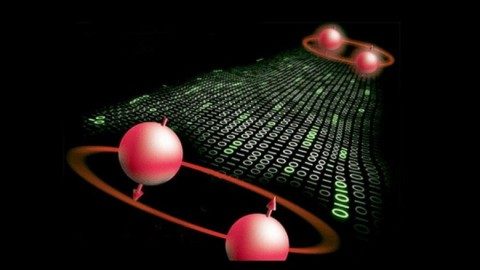 Yet, a number of theoretical and technical barriers stand in the way of building full-fledged quantum computers. Quantum computers are seen a key to solving today’s too complex problems which can not be handled by existing most powerful supercomputers. Moreover a quantum internet could protect the information from malicious attacks in a better way. But all these advancements rely on “quantum information” which is typically encoded in a single quantum particle that is extremely difficult to control and measure.

The experiment was conducted by scientists from the University of Bristol in collaboration with the Technical University of Denmark. They have developed devices based on silicon chips, capable of generating and manipulating individual particles of light in programmable nanoscale circuits. Taking advantage of the quantum entanglement phenomenon, it was possible to conduct quantum teleportation between two microcircuits by transferring the state of a quantum particle from one to the other.

An article about the experiment is published in the Nature Physics journal and co-author Dan Llewellyn said: “We were able to demonstrate a high-quality entanglement link across two chips in the lab, where photons on either chip share a single quantum state.”

“Each chip was then fully programmed to perform a range of demonstrations which utilize the entanglement.”

“The flagship demonstration was a two-chip teleportation experiment, whereby the individual quantum state of a particle is transmitted across the two chips after a quantum measurement is performed. This measurement utilizes the strange behavior of quantum physics, which simultaneously collapses the entanglement link and transfers the particle state to another particle already on the receiver chip.”

Physicists claim that they managed to achieve extremely high fidelity of information transfer at 91% and reported low losses, stability and excellent experimental control, which is extremely important for integrated quantum photonics.